Don Haney told LEX 18 that he never thought he’d be on TV talking about apples that he didn’t sell. He grew up on Haney’s Appledale Farm, which is rich in about 150 years of family history.

The spokesperson for Kentucky Fish and Wildlife Kevin Kelly tells LEX 18 that the incident happened Saturday when officers, patrolling the area for illegal dove hunting, noticed a car in a restricted section of Haney’s Farm.

When officers finally caught up with the two suspects, they found 10 and a half bushels of apples in the backseat, that comes to about 500 pounds. 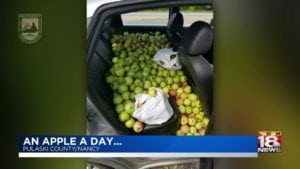 It’s unclear as to why they chose apples to steal, but Haney just hopes they learned a lesson.

The two men, who had a child with them at the time, are due in court next week. The apples were returned to the farm.