GEORGETOWN, Ky. (LEX 18) — At the Kentucky State Fair last month, two displays were made of canned goods to bring attention to Kentucky Proud’s Hunger Initiative. When the fair was over, those cans had to go somewhere.

The canned goods were made to look like a silo and a giant soup bowl. They were put on display by the Georgetown-Scott County Tourism Commission. Now that the displays are over, the food will help hundreds of families, and Amen House Executive Director Michelle Carlisle said that the timing of the donation was perfect.

“Typically, in that giving season in November and December, we get enough canned goods, specifically, to carry us through the entire year. This year. we are looking at a gap,” said Carlisle.

Before this donation, Carlisle believed that they would have run out of canned food by mid-August.

“That foundation of canned goods, it’s just so vitally important to making sure that we’re on our mission to end hunger in Scott County,” she said.

The Amen House is set on canned vegetables, but they are short on soups, peanut butter, and canned meals.

You can learn more about donating, here. 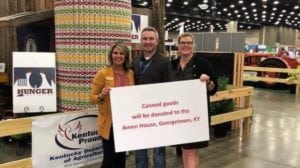