UPDATE: According to the Lexington Police Department, the suspect in an attempted kidnapping, cutting, and robbery was arrested in Berea after a tip led to his whereabouts.

Marquette Adams, 56, was booked into the Madison County Detention Center around 12:20 a.m. Friday.

Police served a warrant for robbery on Harrison King Lane in Berea. 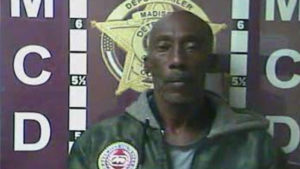 LEXINGTON, Ky. (LEX 18) — Lexington police are searching the city’s north side for a man they say is responsible for two separate crimes that happened Tuesday.

According to police, in the first incident, a man tried to rob a woman in the parking lot of the Walmart on New Circle Road. The 76-year-old woman reported that a man tried to steal her purse. He was unable to steal it, but he cut and hit the victim before running away. She was treated for her injuries at a hospital.

A few hours later, a man matching the robbery suspect’s description attempted to kidnap an 18-year-old female. She told officers she was sitting in her car near 745 West New Circle Road when she was suddenly approached by an unknown man. The victim said the man covered her mouth and threatened her but she was able to kick her way free and run away.

Officers circulated the area but were unsuccessful in locating him.  They have now released a surveillance video from Walmart of the person they believe was involved in both crimes.

Investigators released surveillance video of the suspect from Walmart. Anyone with knowledge of his identity or whereabouts is asked to call Lexington Police at (859) 258-3600.

Anonymous tips, including photos and videos, can be submitted by texting LEX PD plus the tip to CRIMES (274637). Information can also be sent anonymously through Bluegrass Crime Stoppers at (859) 253-2020.