(LEX 18)- Big M Superstore General Sales Manager Dustin Dzierzek tells LEX 18 that the dealership is donating a car to the man whose car was flipped by UK fans Saturday.

Dzierzek said they are giving him a UK blue 2004 Mazda 3.

The owner reached out to the man, who was identified as Matt, after hearing the story. Big M Superstore also apologized to Matt on behalf of the Big Blue Nation.

Matt’s mother said that her son was visiting a friend and had parked the car in front of his friends’ home when it was destroyed.

“While no couches were burned this year, probably due to the rain, and no human injuries surfaced, a small white car lost its life. My son, Matt, equally a die-hard UK fan, parked his little white car on the street in front of his friends’ house. And, while spared by the parking services and traffic control of Lexington, it was not spared by the celebrations,” writes Amy Given.

As of now, no arrests have been reported.

The vandalism was captured on camera by a reporter for the Kentucky Kernel.

A GoFundMe had been set up to help the young man after the car was flipped. 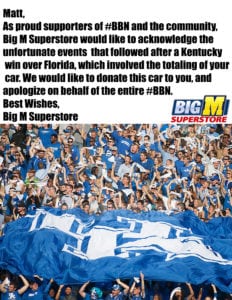 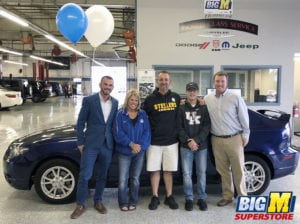