Winchester Postal Workers Back At Work Despite Roof Collapse

CLARK COUNTY, Ky. (LEX 18) — The motto goes “Neither snow, nor rain, nor heat, nor gloom of night,” will prevent mail from being delivered. Postal workers in Winchester are living up to their word.

The U.S. Post Office isn’t usually a place where people come to stop and stare, but in Winchester on Monday, it was the most talked about place in town. After part of their roof collapsed over the weekend, to the surprise of many, they were back at work Monday morning, on time and open for business.

The fire department suspects the culprit was water pooling on the roof from heavy rain.

The entire portion of the building where the roof collapsed is destroyed, but the casualties? Hardly any.

Not one person was hurt, but officials said that had it happened on a normal business day, this story may have been different. The roof came down where rural carriers would have been on a weekday.

A handful of workers did their jobs outside Monday, pulling out mail from the damaged sections, setting things out to dry and getting them ready for delivery, making sure no one has a delay in service. They do expect some “hold packages” to be affected, but otherwise, it’ll be business as usual. 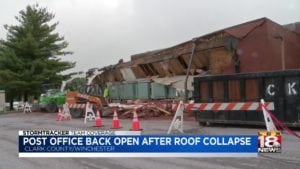