Search For Rowan Co. Boy Suspends For The Day 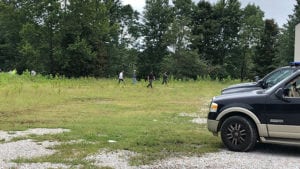 ROWAN COUNTY, Ky. (LEX 18) — The recovery effort for a Rowan County boy swept into a storm drain has ended for the day.

The mayor of Morehead thanked the 350 volunteers who came out to help search for the child. The crews covered rough terrain for several hours.

The mother of the victim thanked rescuers as they piled off school buses to search. She said, “Please bring my baby home.”

Emergency Management Director Ronnie Day said while they are holding out hope for a miracle, the operation switched from a rescue to a recovery mission.

The boy was swept into a storm drain on Sunday during heavy rains that hit the area. As of Tuesday morning, he had been missing for more than 30 hours.

The community gathered Monday night in a vigil to pray for his return.

The vigil happened as dozens of rescuers and volunteers continued searching until there was no daylight left.

“This is the way our hometown works here. We come together as a community. We have a great love for each other,” said Mayor Jim Tom Trent.

The search for the missing boy started Sunday afternoon, and the ground being covering continues to expand, all in hopes of finding him.

The tributary he fell into is less than a mile long, but it feeds into Tripplett Creek, which is the area crews focused on much of Monday.

Drones, boats, cadaver dogs and volunteers are all searching the area around the creek.

“These folks all have kids, and they’re wanting the best outcome that’s possible,” said Day. “So everybody’s upbeat. some of these guys have been in bed for about an hour. Some of them haven’t even been to bed you know. And they’re still here going at it, and hopefully, we can put a closure to it.”

Day says this is a heartbreaking situation but says that the community has rallied behind them.

“This community has just stepped up. And a lot of these folks are not even from this area. They’re from surrounding communities that have just wanted to come. One lady is sitting there with their two kids, and said my kids are out of school today, and they wanted to come be a part of this you know.”

At a vigil in the Rowan County preschool parking lot, people showed up to pray for the missing boy and his family during this time.

“It’s been a while, the child has been lost a while. We’re holding our breath,” said Frank Goss, a school bus driver in Morehead. “There’s hope. We’re hoping and keep looking for hope.”

Trent urged people to lean on their faith and support the family of the missing boy.

“We’re not calling this a tragedy yet,” said Trent. “It’s still an unknown. Our God is a God of miracles, so we don’t know what’s going to happen yet.”