LEXINGTON, Ky. (LEX 18) — With Hurricane Florence quickly approaching, crews across the country are packing their bags and getting on the road to help out.

Elliot Electrical Contractor has already sent more than 400 people to help and on Wednesday morning they sent another crew from Lexington. They sent out 62 more Kentuckians to get ready to help. They say that new poles will be reinstated because with a serious hurricane on the way, power is bound to go out.

“People just don’t like being without power. So, you know, if it hits like they think it’s going, be two or three weeks at least,” said Elliot Superintendent Gary Hall.

When there’s too much water for their trucks to get close to the utility poles, they’ll put on their climbing gear, climb the pole, repair the line and hopefully restore power. Some in the crew have been to hurricanes before and although they are ready to help, they also know what they’ll likely face.

“Just the flooding is about the only thing we’re really worried about. Just the way the news down there anticipates there will be a lot of heavy flooding, that it may do the same thing as Harvey like it did last year, that once it gets there, it’s just gonna stall out there and rain, rain, rain,” said Elliot journeyman lineman William Kilby.

Kilby said that they will probably sleep in the trucks because the hotels will most likely not have electricity or running water.

“I have never had to ask anyone to go on a storm, it’s always been, ‘When do we go?’ and, ‘Where are we going?’ They have a passion for helping people,” said Regional Director Keith Simpson. 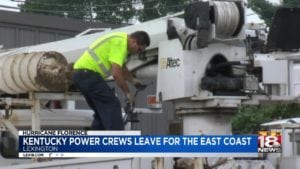