PARIS, Ky. (LEX 18) — A renowned clogger who performed with the group All That on America’s Got Talent has fled the East Coast and is waiting out the storm in his hometown of Paris, Kentucky. 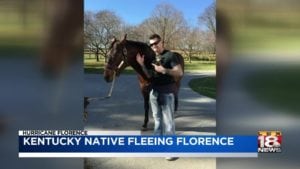 Mike Curtis told LEX 18 that he feels uneasy being miles from his Myrtle Beach home. He was evacuated ahead of Hurricane Florence.

“It never stops your mind because now I kind of feel a little bit helpless. Before every forecast that you see, it keeps getting worse and worse for my area,” said Curtis. “We boarded the windows, we followed the step-by-step plan and did everything possible that we could. But there’s not a lot we can do about that flooding. If that water comes, it comes, and there’s not a lot you can do to stop it. So, that’s my big worry now.”

Curtis’s group All That has its own show in Myrtle Beach.

He says that he watched the place he’s called home since 2005 transform in a matter of days.

“The overall feel in Myrtle Beach is pretty wild before I left. It seemed like nobody was messing with this one. It seemed like everybody was aware of the danger that was coming. They keep calling this storm a monster,” he said.

Curtis told LEX 18 that the National Guard is manning the roads there and the only direction is out.  He made the tip back to Kentucky overnight and is now just watching and waiting to find out what he may return home to.

“Whatever happens, it’s in God’s hands. We’ll get through it no matter what it takes, and we’ll help each other get through it for sure,” said Curtis.