SCOTT COUNTY, Ky (LEX 18)– A Scott County Sheriff’s Deputy injured in a deadly gunfight with a serial robber is getting lots of support from first graders at Stamping Ground Elementary. 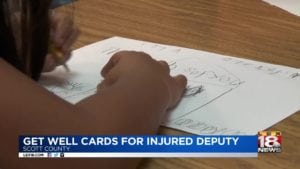 Every card was colored with a young, bright imagination, and included messages of hope and healing from six and seven-year-olds.

“My card is a butterfly going to get nectar and inside, he’s brave and balloons. From Renae to Officer Morales,” said first-grader Renae Schwartz.

Morales has visited their school.

The kids had a message for Morales, “Thanks for keeping us safe” and “I hope you feel better”.

All of the cards were hand-delivered to the Sheriff’s Department Friday in a care basket.