Making A Difference: Madison Co. Man Giving The Gift Of Music To Kids In Need

MADISON COUNTY, Ky (LEX 18)– A Madison County man is giving the gift of music to kids who may otherwise never have the chance. 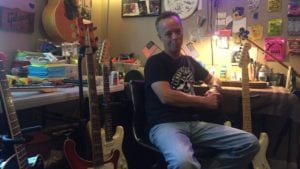 Don’s Guitar Salon out of Berea specializes in repairing guitars for musicians. Guitars are Don Brandenburg’s passion. He got his first guitar at the age of six and his love for it has never ended.

Brandenburg works for some major clients and well-known musicians, but he also caters to a younger crowd. He said he is tired of seeing kids’ faces glued to TV screens and video games, so he takes old or unplayable instruments and fixes them up to give to kids in need.

So whether it’s through a church group or just word of mouth, Don is about leaving his mark on this world by turning his passion and love for music into gifts for future generations.

“If I can make a difference in the life of one kid, I guess that’s a success. There’s too many bad things against them now,” he said.

To learn more about Don’s Guitar Salon or to donate any used guitars to his cause, click here.