LEXINGTON, Ky. (LEX 18) — Police say a man stole a truck from the Smucker’s plant, and when he couldn’t find a way off the property, he created his own.

“He starts pulling open the console, starts looking inside the glove box, things like that for anything he can steal, something of value,” said Detective Mark Thomas with the Lexington Police Department.

Unfortunately, he was able to find the keys to the truck.

The Smucker’s plant is not loosely secured. There are barbed wire fences all around. Thomas said that he started circling around the gated area looking for a way out, but he soon realized there was no way out.

So the man made a decision.

“He starts to focus on his one way out, which is a closed gate,” said Thomas. “He accelerates probably into the 80-90 mile per hour range and barrels right through that gate.”

The gate was destroyed and there was damage to the vehicle as well. Thomas said that the man put a lot of people in harm’s way, including himself.

The truck was abandoned just a few miles away.

If you have any information that leads to an arrest, that tip could get you a cash reward from Bluegrass Crime Stoppers. You can call 859-253-2020 or text your information to ‘CRIMES’, just put “LEX P-D” in the message, along with your anonymous tip. 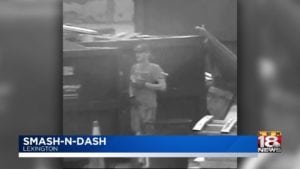