LEXINGTON, Ky (LEX 18)– Rescuers rushed to the scene where a pickup truck went into a ravine in Lexington, but when they got there, police say the driver was nowhere to be found.

It happened before 6 p.m. on Leeann Lane and Old Richmond Road. 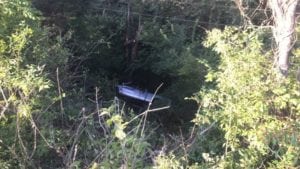 Police say that it appears the truck’s driver went off the roadway and into the ravine when they were trying to go around a curve.

Officers were looking for the owner of the truck to see if anyone was hurt. Eventually, police say the driver returned and was not hurt.

He told police that a tire went out, causing the accident.

No charges will be filed.