FRANKFORT, Ky. (LEX 18) — A man was recovering after two Kentucky State Police officers stepped in to provide life-saving aid at the Capitol in Frankfort.

Officer Roger Swiger’s Tuesday started out like any other. He was doing his normal routine of checking people in as they visited the Capitol. That all changed when he was approached by a man who was running down the hall saying that there was a medical emergency.

“When I got on scene, there was no breathing, no vitals, so I immediately started CPR,” said Swiger.

Performing CPR is a daunting task, so after minutes went by, fellow KSP Officer Casey Mahoney showed up to relieve Swiger of his duties.

“He asked for someone to switch out. I came around him and continued the CPR on the man,” said Mahoney.

From there, they continued together applying the AED that saved the man’s life. 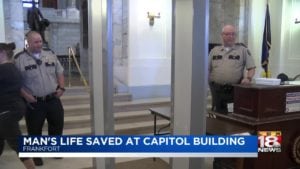 They say that the man’s doctor passed along a message for the officers, saying that if it weren’t for them, things would not have ended well for the man.

Although it is part of their duties, both officers say that they are just happy the man is doing well.