Kentucky Fan Thanks SC Doctor One Year After Shooting

Denise Massey and her boyfriend went to Columbia for the USC-Kentucky game in September 2017. She never saw that game though. The night before, the couple decided to check out The Vista for a bite to eat. While there, she was one of eight people shot. 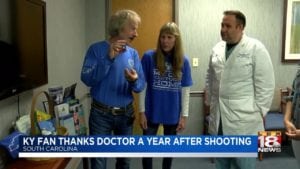 “I remember hearing gunshots, but they were over to the right of me. So, I didn’t have any immediate concern,” she said. “The shots got louder and when I looked up, I saw the fire come out of the gun barrel, two people hanging out of a vehicle, and I felt the impact of the bullet.”

Dr. Aaron Moore treated Denise. He said she suffered a gunshot wound to the face with an exit wound near her spine. It was unclear if Denise would have a severe brain injury or even survive, but after 11 days in the hospital, she was back home.

Three months after that, she was at the altar.

One year after the shooting, the couple, now married, returned to the Midlands. They brought gifts from Kentucky for the Palmetto Health Trauma Center. 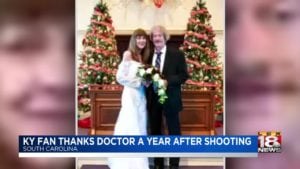 “Having patients come back and say, ‘thanks’, these are the days that make it all worth-while,” said Dr. Moore.

Even after facing death, Denise is still smiling.

“It’s been awesome. It’s been a really good year,” she said.