Making A Difference: Mother Helps Addicts After Losing Her Son

LEXINGTON, Ky. (LEX 18)– After losing her youngest son to an overdose, a local woman is channeling her pain to making sure no other mother experiences a similar loss.

Laura Parrish’s son Nick was just 23-years-old when he died of an overdose in 2016.  At that time, she was already volunteering at the Hope Center in Lexington where Nick had gone through the treatment program, but after his death, something called her to keep coming back. 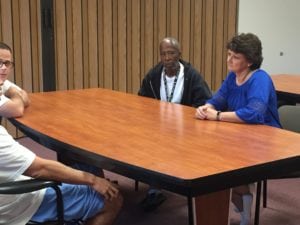 Two years after her son’s death, she still serves lunches at the Hope Center and she mentors men like her son.

“It’s a connection I see in them, I see my son in them as well,” she said.

For men like John Hansard, Parrish serves as a constant. A woman who shows up for them week after week, even though she doesn’t have to.

“She’s a mother to all of us because she does come every week and a lot of the men here don’t have relationships with their family and it gives them something to look forward to,” said Hansard.

Parrish said she is making a difference in the lives of people in the name of her son, Nick.

“He was my son and I loved him, and he was a good person,” she said. “It’s going to take some time for those numbers of overdose deaths to come down, and I’ll be there fighting for those as long as someone will listen to me,” she said.

Parrish was previously named the Hope Center’s Volunteer of the Year. She is also a member of the US Attorney’s Heroin Education Action Team, a group of loved ones who’ve lost someone to an overdose who travel across the state to effect change.