WASHINGTON D.C. (LEX 18)– A statue was unveiled at the Newseum in Washington D.C. Friday, honoring the daughter of a Kentucky sharecropper.

Dunnigan fought to fulfill her dream of becoming a journalist, facing barriers of poverty, racism, and sexism. She became the head of the Associated Negro Press Washington Bureau in 1947.

The bronze statue was sculpted by Lexington artist Amanda Matthews.

It will be on view at the Newseum until December 16. 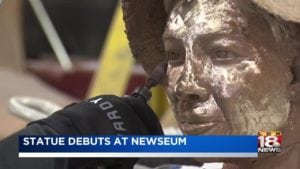