(LEX 18) — Flooding across the commonwealth has left several roads washed out and business closed. 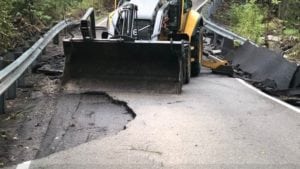 The Scott County Emergency Management Director tells LEX 18 that first responders had to rescue several people from vehicles when people got trapped in high water Sunday. No injuries were reported, but a couple of roads still remain closed as the water levels are still pretty high.

The pavement was ripped away from Switzer Road in Stamping Ground. It will not be completely paved back over until later this week.

The Dollar General in Stamping Ground was closed Monday as employees cleaned up after the weekend flooding. The store manager told LEX 18 that they kept getting calls all morning from people wondering when it will reopen so they can buy themselves cleaning supplies.

Here’s a look at the flooding damage on Switzer Road near highway 227 in Scott County @LEX18News pic.twitter.com/0TthxVDpNL

In Cynthiana, Angilo’s Pizza is normally open on Mondays, but they had to close up for cleanup. Monday morning, the restaurant’s floor was still soaked and parts of it were covered with mud.

We’re told most of the food and the pizza boxes were destroyed in the flooding.