LEX 18 was notified of two posts circulating on social media early this morning.  The first was a post shared by Jerry Little, a Berea councilman.

Little shared an image of a woman falling out of a vehicle, holding a bottle of whiskey. The post reads “Kavanaugh Accuser Arrives For Testimony.” The post was originally shared by the group “Red White Blue News” on Facebook and was implied as an attack on the credibility of the three women accusing Brett Kavanaugh of sexual assault.

Several individuals in Berea began to comment on and share a screen capture of the photo.  When LEX 18 reached out to Little, he told LEX 18 he had never shared the photo. That, in fact, his wife shared the image on his page.

“My wife shares my Facebook, she doesn’t have Facebook. She’s a 100 percent Trump supporter, she shared that little post last night. As quick as I saw it, I took it off. I’m not gonna share that,” he said. 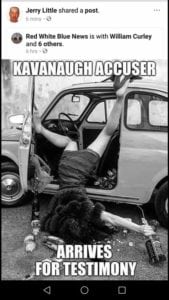 Little posted a similar statement on his page:

“I want to sincerely apologize to anyone that was offended by a post that was shared for a short time on my facebook page. I have always respected everyone regardless of sex, color, age, religion, etc. My wife does not have a facebook page and uses mine from time to time. She, as many others, feel that Judge Kavanaugh is being treated biased and unfairly by the media and shared an inappropriate (sic) post on my facebook. When I saw this post I immediately deleted it from my page. However, before it was deleted others took screenshots and have shared hoping to do harm. They have used this an opportunity to attack me personally hoping to damage my reputation. I have been a member of this community for a very long time and hope those that know me personally will overlook this attack. I wish I would have had the chance to explain the situation before it got to this point. In no way do I condone violence or any mistreatment towards women or anyone for that matter. I understand that sometimes my views on certain matters may differ from others politically but I have and will always do what I feel is best for the citizens of Berea. Please share.”

Not long after Little’s controversial post did someone noticed that a former county magistrate and current candidat, Billy Ray Hughes, had posted a similarly themed meme on a friend’s wall.

That image is too graphic to share the screenshot, but it showed what appeared to be an incredibly intoxicated woman in a sexually explicit post with the words, “36 years ago at the party,” a reference to the party in which Dr. Christine Blasey Ford alleged that a sexual assault took place.

Hughes admitted to LEX 18 that he posted the image, calling it poor judgment. He also issued an apology.