STANTON, Ky. (LEX 18) The City of Stanton Police Department says that the loud explosion heard in Stanton Wednesday night was a controlled demolition of a World War I weapon.

“We didn’t know about the explosion beforehand. Our on-duty officer was just as startled by the explosion as you all were,” a Facebook post from the police department read.

They claimed they did not know about the explosion beforehand and said they would have given the community a warning, had they known.

KSP said that the munition was transported to a remote location and destroyed by detonation around 8:30 p.m. 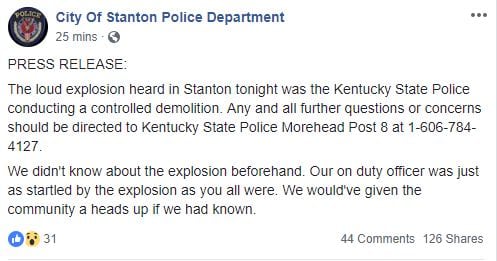 KSP said that on Wednesday around 3 p.m., KSP was contacted by a Powell County deputy about the WWI British artillery shell in Stanton. The deputy was contacted by the owner of the projectile who believed it to be live and dangerous, according to KSP.  KSP’s Hazardous Devices Unit was alerted. KSP said they contact the 123rd Air National Guard Explosive Ordnance Disposal Unit, which they say is protocol in destroying military grade munitions. The projectile was located in a garage and was owned by a citizen who purchased it 30 years ago.

KSP said that at 6 p.m. Wednesday, the Explosive Ordnance Disposal Unit arrived at the scene and determined that the shell was live and should be destroyed. Prior to moving the projectile, KSP said that the KSP Hazardous Devices Unit advised KSP Post 8 in Morehead and the Powell County 911 Dispatch that the device would be removed and detonated.

You can listen to the audio below: