LEXINGTON, Ky. (LEX 18)– The Lexington Police Department is asking the public for help in identifying a man who was caught on camera pulling a knife after stealing clothes from a local store.

Police say that on Monday, September 17, officers were dispatched to the TJ Maxx on West Lowry Lane for a robbery report. The loss prevention employee said that a man was spotted leaving the store wearing pants, a belt, and a white t-shirt that was not paid for. 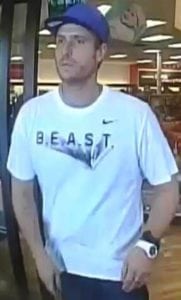 When the loss prevention employee approached the man, he said that the man pulled out a knife from his pocket and threatened the employee. He then left the store.

Police have released surveillance video of the incident in an effort to identify the suspect as well as the woman who was with him. Anyone with information about this case is asked to call Lexington Police at (8590 258-3600.

Anonymous tips, including photos and videos, can be submitted by texting ‘LEX PD’ plus your tip to ‘CRIMES’. You can also call (859) 253-2020 or go to www.bluegrasscrimestoppers.com.

You can watch the video below: