Woman Says Son With Disabilities Was Dragged By Instructor

LEXINGTON, Ky. (LEX 18)- A Lexington mother says her child with autism came home from school with cuts and bruises across his upper body. Now, Fayette County Schools officials confirm they are investigating an incident at school.

Jo Grayson says Friday, Sept. 14 was a long day for her 11-year-old son, Thatcher, a student at Tates Creek Middle School. He has autism, is mostly non-verbal, epilepsy, celiac, and hypermobility.  That day started with speech therapy, then community-based instruction and that was before he got on the bus to school. 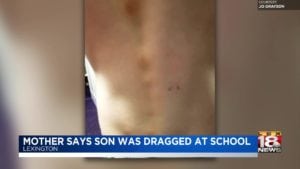 “My son was having a meltdown. He refused to get up off the gym floor, and a teacher and a school nurse dragged him down a hallway until they could get him to the resource classroom,”  Grayson told LEX 18.

Because of his communication difficulties, Jo wasn’t aware of what happened, until she saw the cuts and marks on Thatcher’s body.

“The teacher had messaged me that they had to pick him off of the gym floor earlier in the day. But she did not say that he was dragged down the hallway,” said Grayson.

Grayson says she has been talking to an attorney and also with Fayette County Schools Police about the incident. She would like to see cameras in every classroom and better training for teachers.

The Fayette County School System released this statement: “We are committed to ensuring the safety and well-being of our students and take any and all reports of this nature seriously. While we cannot discuss individual personnel matters, we can say that in a situation involving these types of allegations, we would make a report to the cabinet for health and family services and place the employee involved on administrative leave until the investigation is complete.”