LEXINGTON, Ky. (LEX 18)– An Applebee’s server in Radcliff was probably expecting a tip after her table of four patrons left, but instead, she had a racist message waiting for her.

The note Jasmine Brewer received said, “We don’t tip black people” on it. It was written on a napkin.

Brewer’s mother, Regina Boone, took to Facebook to express her family’s dismay. “I don’t expect or tolerate disrespect…I’m furious…but I know there’s a God in Heaven who sits high and looks low. Racial and social justice!” Her messaged reached thousands, generating an outpour of support.

“It was great sadness, and once again, it reaffirmed my belief that we have become a very angry, a very angry, and hateful society,” said Father Jim Sichko. 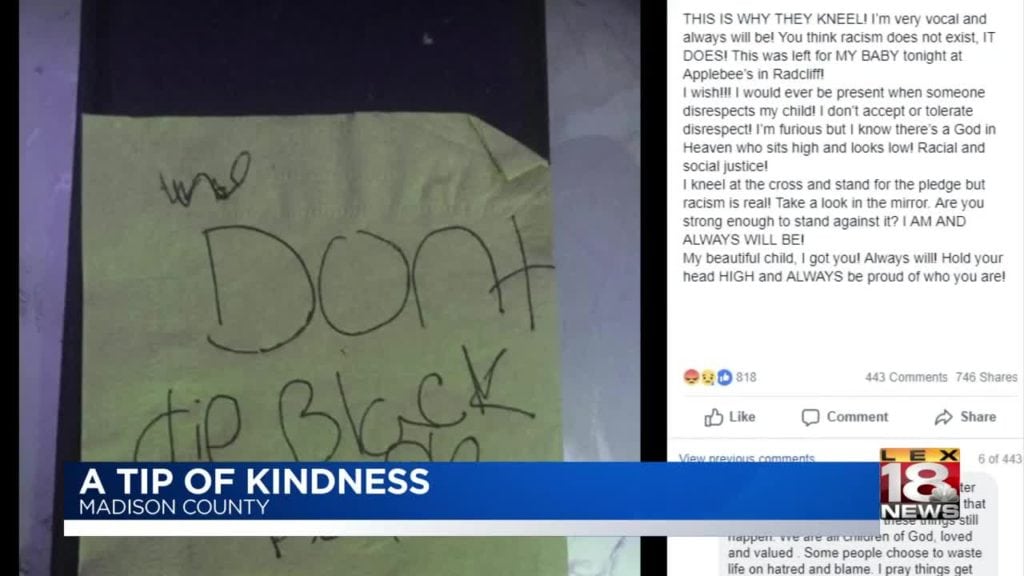 Sichko wanted Jasmine Brewer and her mom to know that hate can be drowned out with kindness.

Sichko said that the reason he forwarded Brewer a tip was to show her that not all people are like that table. He said it is not about the dollar figure but is about the underlying message.

“There is nothing wrong in giving, it costs nothing to be kind,” he said.

Brewer’s family was never soliciting donations, but Boone told LEX 18 that she appreciates the gesture and hopes to use the money to form an organization dedicated to combating racism and hate.