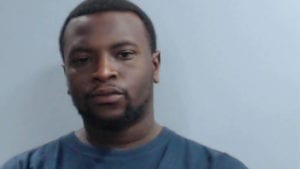 Police say 24-year-old Deaijamar Hawkins was a suspect in an ongoing investigation.

Police tried to approach him and another suspect, who allegedly ran away.

According to his arrest citation, Hawkins was found with cocaine and a gun.

Police say he was in the area to commit a robbery and that the other suspect who ran away is a 15-year-old.