PULASKI COUNTY, Ky. (LEX 18)– A Somerset boy is in search of his stuffed animal, Scruffy, that went missing this past weekend during his stay at Kentucky Children’s Hospital.

“He’s with me in really rough times. It’s just comforting to have him,” said Wesley.

He was diagnosed with an autoimmune disease when he was three-years-old, putting him in the hospital several times throughout his life.

Wesley’s mom, Penny, said that Scruffy has been a part of Wesley’s support system since the day he was born prematurely.

“He was in the NICU for seven weeks. He was 11 weeks early. I put it in the incubator with him, and it looked over him while he was in the hospital,” said Penny. 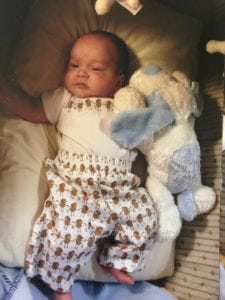 Scruffy was with Wesley in the hospital in Lexington, but Scruffy never made it back to Somerset.

Penny has made several calls to the hospital, but the stuffed animal still hasn’t turned up.

After a decade of these two together, Wesley said that Scruffy is irreplaceable.

“I want my Scruffy back, that’s all I can say,” said Wesley.