Vigil In Memory Of Teenager And Unborn Child 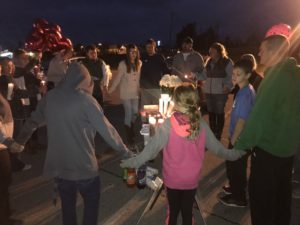 LAWRENCEBURG, Ky. (LEX 18) – Family of an Anderson County woman gathered tonight to celebrate what would have been her 19th birthday.

Kaytlynn Doss and her unborn child were killed in a car accident earlier this year.

Her family held a candlelight vigil at Anderson County High School. It was in memory of the two lives that were ripped away from them in an instant.

“We’re all just on a day to day basis just taking one step at a time. That’s all we can do,” said Kaytlynn’s aunt, Tammie Maggard.

Maggard says she feels the pain of her loss everyday.

“She was five months pregnant and the baby’s name was going to be america and we were hoping to see her,” said Maggard.

Kaytlynn’s family says she should be taking care of her newborn now. Instead, they’re fighting for justice in her name.

“I’m very hopeful that justice will be served, and I will not give up until it is,” said Maggard.

Doss’s boyfriend, Colton Willard, was in the car at the time of the crash. He’s been charged with with reckless homicide and fourth degree fetal homicide. Police allege he recklessly caused the crash.