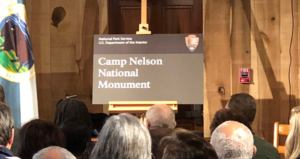 Camp Nelson is now designated as a National Historic Landmark.

Local and national leaders were all in attendance for the unveiling ceremony.

“They showed grit, they showed determination, they showed this country what we could be,” said Ryan Zinke, US Secretary of the Interior.

Camp Nelson is best known as grounds for training and recruiting African-American troops during the Civil War. But it also served as a place of safety and freedom.

“As men, women, and children fled hundreds of miles, to come to what was referred to as our Canada. Their hope of emancipation,” said Jessamine County Judge Executive David West.

Camp Nelson is now incorporated into the National Parks system.

“This elevates the status as one of those very few places in the country that the National Parks Service represents as historically significant to the whole country, and to the world,” said Rep. Andy Barr.