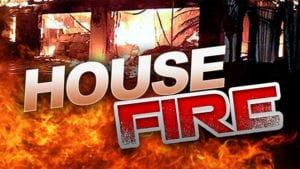 MGNMADISON COUNTY, Ky. (LEX 18) – A family in Madison County is without a home this evening, after their house was destroyed by a fire.

This happened on Bob White Drive in the northern part of the county.

“We looked out the window first, and the house was already completely engulfed,” said Mitch Steeves, a neighbor.

No one was home at the time of the fire, but the family that lived there is now entering a period of uncertainty.

Firefighters were called out around 10:00 on Saturday night when neighbors noticed flames billowing from the house

Firefighters endured a long night trying to put out the flames. But they were back in the morning, when the fire rekindled.

Meanwhile, firefighters averted a near tragedy on their way to the scene.

Three Kirksville Volunteer firefighters were sent to the hospital after the car they were in crashed. We’re told no one was seriously hurt and they were released early in the morning.