OWENSBORO, Ky. (AP) — A Kentucky man posted online that he and his 5-year-old son were mistreated while dressed as Nazis for a Halloween event and is now facing even more backlash.

News outlets report Bryant Goldbach posted online a picture of him and his son Friday, saying they attended a “Trail of Treats” event where they were threatened over their costumes. The post says Goldbach dressed as a Nazi officer and his son as Adolf Hitler because of the family’s love of history.

It says “we had the displeasure of dealing with the fruits of the so-called ‘Tolerant Left.’ ” Goldbach has since said the costumes were in poor taste and apologized. 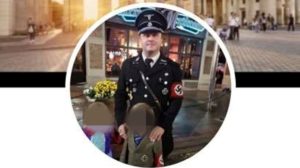 Screenshots of his Facebook prior to his apology show slogans such as “White pride doesn’t mean hate.”