LAUREL COUNTY, Ky. (LEX 18) — Deputies in Laurel County have arrested a man who they say shot up his parents’ home.

Deputies say that it happened Monday morning on Circle Street in London. Authorities were called to the area after reports that 21-year-old Matthew Sherman was spotted walking along the road with a gun. 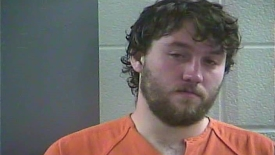 After arresting Sherman for public intoxication, deputies said they learned his parents’ home had been shot nearby. Investigators said Sherman fired shots into the home after an argument with his father, while his parents and 8-year-old brother were inside.

He is now facing three counts of wanton endangerment.