Amy McGrath Holds “Get Out The Vote” Rally 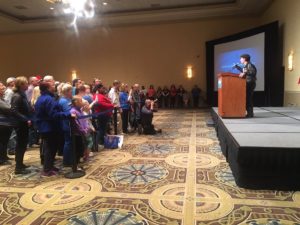 In front of a raucous crowd of supporters at the Lexington Convention Center, retired Lt. Col. McGrath told voters the issues she’ll fight for if elected.

“Healthcare is still number one,” McGrath told the crowd. “Good quality jobs and an economy that works for everyone, not just the one percent is very important as well.”

McGrath didn’t spend too much time on specific issues though. Instead, she focused on why she says everyone needs to get out and vote this Tuesday.

“This election is about the soul of our country,” McGrath said mid-speech. “It is about who we are as Kentuckians and as Americans.”

Throughout the event, several other speakers echoed a similar message, urging support in local elections as well. A number of candidates running for state senate seats got a large applause when they came to the stage.

Still, McGrath’s race against Congressman Andy Barr was what many supporters had on their minds.

“We need balance in Washington and we need someone who is going to put country over party,” said Bentley Patrick, a member of the Kentucky Pipe Trades Association.

“This vote matters more than any in my entire 64 years of life,” said Sarah Katzenmaier. “We’ve got to win back one of the branches of the government so that we have a say.”

At a debate on KET earlier this week, the incumbent laid out why voters should chose him again.

“We are getting results for the people of this district, Barr said. “This is a booming economy, people have greater confidence, there’s more jobs, wages are growing, paychecks are growing.”

To finish off the rally, McGrath echoed repeated the same sentiment of her first TV ad announcing her candidacy, telling the crowd she’s confident going into election day.

“I think people are ready for someone who puts their country and Kentucky before their political party. That’s where most people are at,” McGrath said following the rally.

On Friday, Congressman Barr will host his own rally in Woodford County, where US House Majority Whip Steve Scalise will lend his support.