(LEX 18/ Courier Journal)–Late football legend Don Meredith wanted his mentally challenged daughter to stay in the care of the Stewart Home in Frankfort, but some relatives have claimed that her stepmother underfunded the daughter’s trust, which led to a court battle over allegations of abuse and neglect.

Heather Meredith, 49, is the football star’s youngest child. She has lived at the Stewart Home for years and it is where her father wanted her to stay. He set up a trust to cover the necessary expenses, but when Don Meredith died in 2010, Heather’s stepmother took over guardianship and control of her trust.

In hundreds of documents, collected during an investigation by the Franklin County Sheriff’s Department, it is alleged, by Heather’s biological mother, that social workers stated Heather was abused and neglected by not having enough money in her trust to cover the necessary expenses. It also states that Heather’s biological mother believes Heather’s welfare suffered because of her stepmother, who controlled the trust. A state social worker reported that Heather’s teeth were not fixed for seven years and she went on to write that her guardian “failed to protect her financial interest and medical issues.” 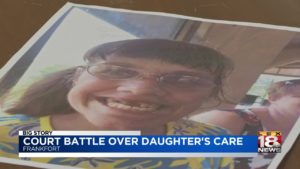 The allegations were later unsubstantiated.

“The bottom line for me was always that I was concerned whether or not the trust was properly funded and this girl’s, woman’s needs were met,” said Franklin County Commonwealth’s Attorney Larry Cleveland. “Those photos, that information was troubling.”

Cleveland was asked to prosecute the case, but says that it was ultimately settled. Heather’s biological mother took over guardianship and her stepmother put more money into the trust so Heather’s needs are funded for a lifetime.

The allegations of abuse and neglect were never handled criminally.

“I thought that if I took my case to a grand jury, I’d probably get an indictment, let’s put it that way,” said Cleveland.

A family spokesperson for Heather Meredith’s biological family sent LEX 18 a statement, “While we are disappointed that such a private and sensitive family matter has been made public, we take comfort knowing that Heather, the most important party in this situation, is now safe and happy.”