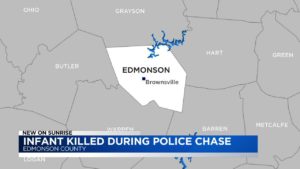 EDMONSON COUNTY, Ky. (LEX 18) — Kentucky State Police say an infant was killed when the car he was in crashed during a pursuit in Edmonson County.

Authorities said they found an active methamphetamine lab inside the wrecked car.

Police say the pursuit began in Barren County when a deputy tried to pull over a vehicle driven by James Settles, who police say was driving recklessly at the time.

The deputy says Settles sped away, but a short time later the officer found the vehicle wrecked just over the county line.

Four-month-old Lucas Settles was pronounced dead at the scene.

KSP says he was not in a child seat at the time of the crash.

James Settles and the child’s mother, Ruth Clemmons, were listed in critical condition at area hospitals.