Police: Georgetown Woman On Heroin Passed Out At Wheel With Kids In Car 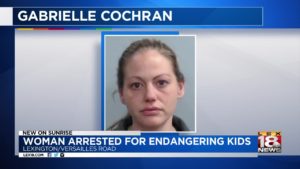 LEXINGTON, Ky. (LEX 18) — Lexington police say a Georgetown woman admitted to being on heroin Saturday night when she nearly crashed her car while driving with her four children in the vehicle.

Authorities arrested 35-year-old Gabrielle Nicole Cochran just before 8 p.m. after allegedly finding her slumped over the wheel of her vehicle in the 2300 block of Versailles Road.

According to he arrest citation, Cochran admitted to police that she had snorted heroin, knowing she needed to drive her children to Georgetown.

Police said she swerved into oncoming traffic and went onto a curb before coming to a stop. Two of her children were not properly in restrained.

She was being held in the Fayette County Detention Center.