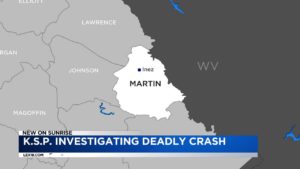 Authorities say the single-vehicle crash occurred around 6 p.m. on Kentucky Highway 645 in Inez.

Police said Michael Ferrell was driving a 2003 Ford F250 southbound on Kentucky 645 when he left the road, then overcorrected, eventually striking an embankment.

He was taken to an area hospital, where he later was pronounced dead.

Police said alcohol and drugs do not appear to be a factor in the crash.