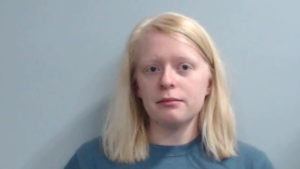 LEXINGTON, Ky. (LEX 18) – The UK student who was arrested after a hoax threat contacted media outlets, including LEX 18, about the post prior to being arrested.

19-year-old Haily Duvall, of Glasgow, is accused of making a threat via Snapchat that involved the White Hall classroom building.

Several students at UK sent LEX 18 screenshots of the threat. An email, from someone identifying herself as Duvall, was sent to a reporter containing the images.

When asked if they were posted on the app, Duvall responded, “Yes. Some were deleted from the Snapchat map. ”

The Kentucky Kernel, the student newspaper, also interviewed her before it was known that she was the alleged culprit.

Duvall is charged with terroristic threatening and falsely reporting an incident. She declined an interview from the Fayette County Detention Center.