JESSAMINE COUNTY, Ky. (LEX 18) — A man charged in a 2016 crash that killed a Jessamine County woman is back in jail after police say he showed up intoxicated at a local elementary school.

James Kouns was out on bail after being charged in the death of Amber Parker. Police say Kouns struck Parker’s vehicle head-on in April 2016. He has been charged with murder and driving under the influence. He is out on bail while awaiting trial.

According to an arrest citation, officers were dispatched to  Rosenwald Dunbar Elementary in Nicholasville in reference to a reckless driver. Police say they found Kouns outside his vehicle. He told officers that he was trying to pick up his daughter from sports practice.

Officers say Kouns was unsteady on his feet and appeared to be intoxicated. Upon searching his vehicle, police say they located eight and a half clonidine hydrochloride pills.

A spokesperson with Nicholasville police tells LEX 18 that they aren’t sure how the new charges will affect his bail. 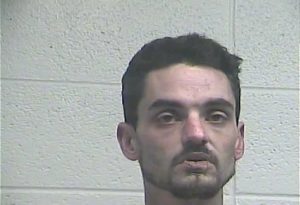