According to KCTV 5,  27-year-old Courtney Bivins was killed by Joshua P. Mobley, 34, of Mission, KS, who then shot and killed himself. 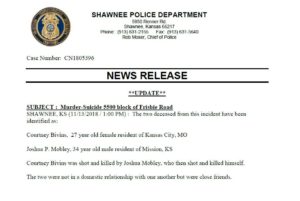 Police say in a Facebook post that two bodies were found Sunday near Riverfront Park. The discovery was made while officers were responding to a request from Kansas City Police, where Clifton currently resided, to check on the welfare of a person thought to be endangered.

The motive is unclear at this point, but police say the two were friends.

Meanwhile, the shock of her sudden death has left her loved ones back in Kentucky heartbroken.

Her former coach says she was a leader on and off the court.

“Didn’t care to tell you what she thought, when she thought it,” said Miranda Denney. “Very charismatic, she was a hard kid not to like.”

Known as Courtney Clifton while at Campbellsville, she was a nurse in the outskirts of Kansas City and actively pursuing a career field in anesthesiology. She graduated from Campbellsville University in May 2013 with a Bachelor of Science in Biology and minor in Chemistry.

Clifton transferred to Campbellsville University after playing her freshman year at Western Kentucky University. She was a spot player for WKU after playing in 19 games, including a 22-point performance in her collegiate debut, hitting 6-of-9 3-point baskets.

“Campbellsville Lady Tigers mourn the loss of one of our alumni. Courtney Clifton, a 2013 graduate died on Tuesday. She was a nurse and lived in Missouri. We have no further details or funeral arrangements. Please join us in praying for everyone affected by this horrible loss.”

She was also part of the 2007 state championship basketball team at Lexington Christian Academy.

Visitation has not been set at this time.