LEXINGTON, Ky. (LEX 18)– We are hearing reports of slick roads in Central Kentucky, especially on bridges and overpasses.

Road crews want to remind people to slow down on slick roads. They are out salting the roads.

The Franklin County Sheriff’s Office says that they worked 8-10 accidents in an hour. Deputies will redirect traffic around the bridge of the first Frankfort exit until the weather improves. 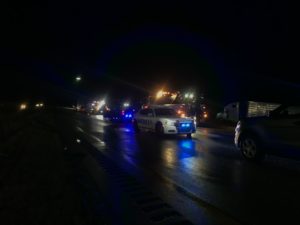 Be careful if you are travelling tonight.

We will keep you up-to-date with weather conditions on LEX18.com and the LEX 18 Facebook Page and Twitter.

You can view any closings and delays here.

NB I-75, just past exit 110 is slick. Traffic is slowed because of a two car accident. Be careful! @LEX18News pic.twitter.com/Z1HVUEIepy

I-75 is slick! Especially on the overpasses. There is another accident on the NB, near mm 115. If you are driving, please slow down! @LEX18News pic.twitter.com/d49YXHwPW1

Salt is being put down as the winter weather advisory continues for Lexington until 6am @LEX18News pic.twitter.com/B9LfaMk0Tx

Almost to Frankfort on I-64 and have found another salt truck! The roads are still slick @LEX18News pic.twitter.com/oXl6q5UGAr

The Franklin County Sheriff says within the past hour, they’ve worked 8-10 wrecks. Three of them, they’re currently working on @LEX18News

The Franklin County Sheriff says deputies will be re-directing traffic from I-64 West, just before the first Frankfort exit. This bridge is a sheet of black ice @LEX18News pic.twitter.com/weqevh8IIh