State Rep. Rocky Adkins Says He Is Running For Governor In 2019

MOREHEAD, Ky. (LEX 18)– State Representative Rocky Adkins announced on Wednesday that he will be running for Governor of Kentucky in the 2019 race.

Adkins made this announcement at the Morehead Conference Center at a public event. A number of people took the stage to endorse the representative, including former Morehead State basketball coach Wayne Martin and two young students. 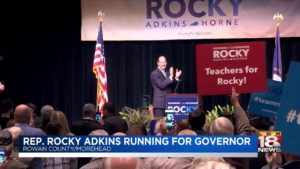 His running mate, Stephanie Horne, also took the stage, saying, “I am proud to stand up and fight for the future of Kentucky.” She is on the Jefferson County Board of Education.

Adkins vows to be a champion of public education and working families in the Commonwealth. He says he wants to protect the public pension system and strengthen Kentucky’s economy.

In his speech Wednesday, he emphasized his support for public educators and their fight to keep their pension.

“What happened to educators and public employees is inexcusable. They should never have to beg for the pension they were promised,” Adkins said. “I’m here to ask for the honor to lead the Commonwealth as your next governor of Kentucky.”

A spokesman for the Republican Party of Kentucky just released this statement regarding Rep. Adkins entering the gubernatorial race pic.twitter.com/QWuYeBTwUE