MENIFEE COUNTY, Ky. (LEX 18) – The Menifee County woman accused of killing her toddler and not seeking medical attention has entered a guilty plea.

Laura Blanton and her boyfriend Robert Collins were charged with the murder of her daughter Aria Blanton.  Her boyfriend brought her unresponsive child to her place of work. 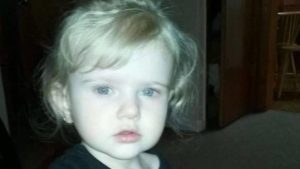 Her co-workers at a local convenience store ended up calling police and EMS.

Initially, Blanton told authorities that she saw bruising after Collins had been taking care of her daughter. An autopsy showed the girl had suffered a lacerated spleen, fractured skull, and internal bleeding.

Blanton pleaded guilty to two charges of complicity to criminal abuse first degree and one charge of murder. She was sentenced to 20 years in prison. She was initially charged with rape, sodomy and murder. Those charges were amended.

Robert Collins is on the docket for next month.