MONTGOMERY COUNTY, Ky. (LEX 18)– A man is in the hospital after two cars collided at the busy intersection of West High and North Maysville Street in downtown Mount Sterling.

The two cars hit with such force that they were pushed from the intersection into the nearby parking lot of Caswell Prewitt Realty. The impact caused two of the building’s pillars to bend and bricks to be loosened from the side of the building.

Archie Harper, a victim in the accident, tells LEX 18 that the driver who hit him must have been speeding and was headed towards a light that he says was still red.

Authorities tell LEX 18 that the other driver had a minor head injury and was taken to the hospital. 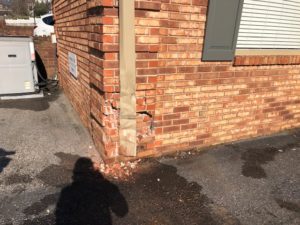