LEXINGTON, Ky. (LEX 18)– Mayor Jim Gray told LEX 18 that he wants the Lexington Center board to put a ban in place after Nazi items were displayed for sale at a gun show at Heritage Hall.

Matt Merrifield went to the gun show in February and told LEX 18 he immediately walked in and saw the items.

“I looked down at the case when I saw other swastikas, armbands. I saw knives, the helmet, and everything else,” he said. “Honestly, I was like, ‘why is this here?'” 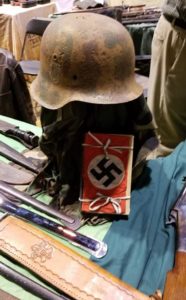 LEX 18’s Leigh Searcy asked Merrifield why he is speaking out about the items now and he said that the recent Freedom Hall controversy in Louisville sparked his discontent about the items. In Louisville, Nazi Christmas ornaments were on display.

“This is something our grandfathers fought against in World War II,” said Merrifield. “Why is this ideology showing up here?”

LEX 18 asked officials with the Lexington Center Corporation to see if any policy was in place about selling these items. They said that gun shows are handled by private promoters and LCC just rents the space but is contracted by the City of Lexington to run events.

LEX 18’s Leigh Searcy showed photos of the items to Lexington Mayor Jim Gray. He released this statement, “There is no place for the sale of Nazi memorabilia at Lexington Center. I will send a letter to the board asking that they put an immediate ban in place.”

Searcy spoke with the vendor selling the items. He told her that they were a part of history and he strongly disagrees with anyone who is offended by them.

The promoter of the January and February 2018 shows tells LEX 18 that he was unaware that the Nazi items were on display.

Rick Kehrli, of RK Shows, tells LEX 18 that when the gun show goes to the Kentucky Horse Park early next year, Nazi memorabilia will not be allowed.