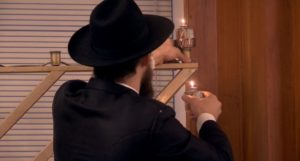 Rabbi Shlomo Litvin of the UK Jewish Student Center led the celebration at the city Government Center and recruited the help of Mayor-Elect Linda Gorton to light the first candle on a 10-foot menorah.

Monday marked the second day of Hanukkah. The holiday lasts eight days and celebrates two miracles in the religion’s history.

This year, Hanukkah comes more than five weeks after a gunman killed eleven people at a Pittsburgh synagogue.

The news rattled Jewish communities worldwide, inspiring people in cities all over, including Lexington, to rally and show their support.

“Lexington has consistently stood up as a source for light,” said Rabbi Litvin. “Regardless of moments of darkness, that is not who we are. That is not what we believe in.” 46

The Jewish community’s support for its own victims didn’t stop when the vigils and rallies did.

Per a tradition called “sloshim,” mourning is to continue for 30 days after burial. As that time ended, Hanukkah started.

“Literally all over the world menorahs are being lit, light is being added. there is no greater way to mark the end of this mourning period for this darkness then by creating new light,” Litvin said.

For the entirety of Hanukkah, the 10-foot menorah will remain lit in Lexington’s Government Center as a symbol of that light, hope, and perseverance for all to see.