Det. Mengedoht was killed during a traffic stop on Christmas Eve on I-64.

According to WAVE 3 News, the procession will begin at 2727 South Third Street on Saturday at 9 a.m.

The route will then travel through several neighborhoods in Louisville and will include a stop at the LMPD 2nd Division before coming to an end at Resthaven Funeral Home.

There will be road closures during the procession. 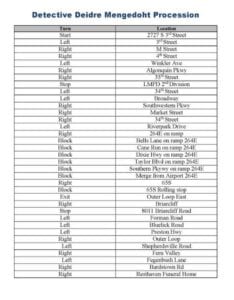