FRANKFORT, Ky. (LEX 18) – A Kentucky World War II hero who was recently honored with the French Legion of Honor has died. 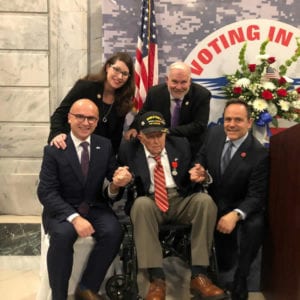 Secretary of State Alison Lundergan Grimes announced the death of LTC William Pollard. Pollard was honored in November for his contribution to the liberation of France during WWII.

Pollard was 100 years old.  Grimes said that he passed away this weekend.

Such an honor to host LTC William Pollard in the Capitol as he was recognized with the French Legion of Honor recently. He passed away this weekend & I share my deepest condolences with his family. LTC Pollard was a true American hero. pic.twitter.com/XH0AtPJq9P