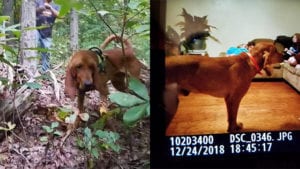 Inside the courtroom, the prosecution called a Kentucky State trooper to testify about the day Hunter was killed.

The trooper was asked to clarify what Charles Collins said about the incident. He testified that Collins said the dog was on his property an that he deserved it, but the trooper says Collins did not admit to shooting the dog himself.

The defense argued that it was not known that Hunter was a service tracking dog, so they asked the judge to remove the charge of first-degree assault on a service animal.

Hunter’s owner, David Conrad, also was in the courtroom Wednesday morning. He said that it was well-known in his neighborhood that Hunter was a service tracking dog.

“The little road that I live on goes to a dead end. I’m the first house on the road, and we have had numerous dogs out there training and I’ve had a lot of neighbors stop by and ask, ‘You know, we’re not trying to be nosey, but what are you doing?’ And we’ve told them, so everybody knew that he was a service dog on that road,” said Conrad.

Ultimately, the judge decided that this case should go to a grand jury.

Another puppy was donated to the Estill County Rescue Squad. The 6-month-old bloodhound is Hunter’s half-brother. The squad will begin training him as soon as possible.