Ace Davis, 10, took on the 2015 “deflategate” as his science fair project. The problem was, “the NFL alleged that Tom Brady ordered the deliberate deflating of footballs to gain an advantage.” Ace put it to the test, not only to spite Tom Brady fans, but his Patriot-loving cousin as well.

“Mason is a big Patriots fan, and I kind of did this to get revenge,” said Ace. 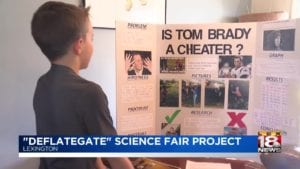 Ace’s dad, Chris, said that science is not one of Ace’s favorite subjects.

“You grab the one thing that he is really passionate about, and that’s football,” said Chris.

The topic was a no-brainer.

The Davis family took their hypothesis out to their backyard, and after his dad posted on social media that he won the science fair, it went viral.

Many people find the 10-year-old’s project entertaining, but some Patriots fans have a different feeling.

“I’m pretty sure they’re looking for me,” said Ace.

“What are you going to do if they find you?” LEX 18’s Alexa Helwig asked the science fair winner.

Ace said that in his project, he concluded that Tom Brady cheats.

Ace will now move onto the next round of the science fair with his Tom Brady-inspired project.