Justice Sought After 5 Dogs Dumped On Side Of Road

GARRARD COUNTY, Ky. (LEX 18) — Dogs recently were found dumped on the side of a Garrard County road, some suffering from frostbite.

“Trooper was severely emaciated. He has frostbite on his genitals. He was severely malnourished-he was just skin on bones,” said Garrard County Animal Shelter volunteer Tiffany Cole.

The pit bull mix was taken to the vet and is still there recovering. 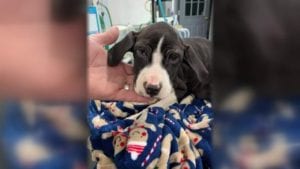 “With it being as cold as it was that night, Trooper wouldn’t have made it through the night had somebody not seen us and called us and the temperatures are still dropping,” said Cole.

Shelter staff and volunteers arrived on Buckeye Road on Saturday night after someone called saying that they found the dogs on the side of the road. In addition to Trooper, the shelter rescued four other young pups Saturday night.

They say that they believe those dogs are terrier mixes between eight months and 1 year old.

In addition to donations, the shelter is asking for the community’s help to find out who dumped these dogs on the side of the road. 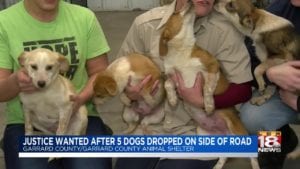 The charges could include abandonment, as well as abuse and neglect. In addition to caring for the four dogs, the shelter says that they have someone out around the clock looking for a fifth dog that they were not able to catch Saturday.