Lexington Bar Issued Show Cause Order After Fatal I-75 Crash

LEXINGTON, Ky. (LEX 18)– Lexington police say that a local bar has been issued a show cause order in regards to serving alcohol to the driver who caused a fatal interstate crash that killed himself and a family of five.

The crash happened on January 6, around 2:30 a.m. on I-75 North. Police say that 41-year-old Joey Lee Bailey, of Georgetown, was driving the wrong way on the interstate when he hit a Michigan family’s SUV head-on, causing it to catch fire. All five members of the Abbas family were killed, 42-year-old Issam, 38-year-old Dr. Rima Abbas, and their two children 14-year-old Ali, 13-year-old Isabella, and 7-year-old Giselle.

The crash happened around mile marker 107. Investigators say that a review of the truck’s event data recorder found Bailey was driving 70-80 miles per hour when the crash happened.

Police say that the Lexington Alcoholic Beverage Control Officer gave notice this week to Horseshoes Kentucky Grill & Saloon on North Broadway for allegedly violating KRS 244.080; selling alcoholic beverages to patrons who are under the influence.

Police say that it is believed after leaving Horseshoes, Bailey drove a pickup truck onto the northbound lanes of I-75 starting at the 113-mile marker. Several motorists reported avoiding him and passing him as he drove the wrong way and they said he had one headlight out.

A toxicology report from the FayetteCounty Coroner’s Office said that Bailey had a blood alcohol level of .306 at the time fo the crash and investigators say that they found evidence he had been drinking at Horsehoes and another bar the night of the crash.

A pre-hearing conference between the Lexington ABC office and Horseshoes is scheduled for February 19 and a separate investigation by Kentucky ABC is ongoing.

Horseshoes released the following statement, “This is such an horrific event with this tragic loss of life for all of the families involved. We know that law enforcement is investigating the facts surrounding this and we have cooperated with them as they have requested. We have turned this over to our representatives to have the facts determined and we will have no more public comment at this time.” 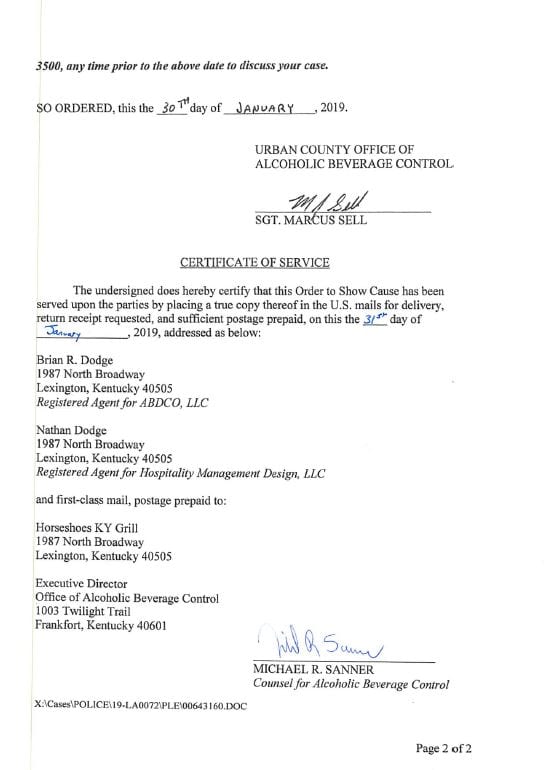