SCOTT COUNTY, Ky. (LEX 18)– The Scott County man charged for allegedly beating his caretaker to death with a bat appeared in court Friday. 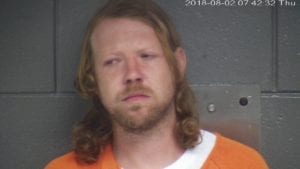 Hunter Moore, who officers say told them, “God told me to beat the demon from the woman downstairs,” pleaded not guilty Friday.

His lawyer told the court that his competency report should be ready soon. Moore is charged with the murder of 53-year-old Denise Rene Hamilton, who was his caretaker.

According to the arrest citation, in August 2018, Police found Hamilton unresponsive on the floor in a home on Markham Drive. Police say Moore told them he was upstairs when God told him to “beat the demon” out of Hamilton. The citation said he allegedly went downstairs with a baseball bat and hit Hamilton in the head, arms, knees, and that he attempted to “beat the demon from the woman’s stomach.”

After the murder, neighbors told LEX 18 that they were not surprised this happened.

One neighbor, who wanted to remain anonymous, said he was afraid of Moore and that Moore repeatedly did strange things, like talk to a tree every day.

“He would do a little something on his skateboard, then explain to the tree what he’d done,” the neighbor said.